There’s been a lot happening on the Fraser Coast lately. Back in October 2019, Hervey Bay was crowned the world’s first Whale Heritage Site, Fraser Island was announced as one of the most beautiful places in Australia by Vogue Magazine and late last year our very own King and Queen of culinary, Dan and Steph announced their return to our tv screens later this year for MKR: The Rivals.
Our homegrown heroes have been smashing the competition so far, heading straight to the top of the leader board (and scoring their first 10!) after their first cook of the competition for House Manu.

Recently, we sat down with our Fraser Coast Ambassadors to see how they’re feeling about heading back into the heat of the My Kitchen Rules’ kitchen.
“It all started when we received a call back in May 2019, wondering if we would consider coming back to be a part of the new series of MKR…

Of course our reaction was YES!

Not many people get the opportunity to do MKR once let alone twice – it’s very special.”

Looking back, a lot has changed for our dream team since winning the hit tv series back in 2013. And there was a lot of reasons to become homesick at times.

“We are so proud to call the Fraser Coast home and have for over 30 years now. It certainly is the best place to bring up a family. The community is always supportive and the lifestyle is paradise!

Throughout MKR 2020 we wanted to showcase the Fraser Coast and its wonderful produce as much as we could.” #braggingrights

When they weren’t missing the pristine family-friendly beaches of Hervey Bay, scallops, the humpbacks, Fraser Island and Lady Elliot Island (to name just a few!), they were certainly missing their friends and family.

For the past six years, Dan & Steph have co-parented their first baby, a successful beachside café along the beautiful Charlton Esplanade of Hervey Bay.

But when he isn’t known as Dan The Sausage Man and Steph The Dessert Queen at work, they are simply mum and dad to their gorgeous five year old, Emmy, who just started prep this week.

“Filming took three months, it was the hardest thing we have ever endured. Emmy stayed at home in Hervey Bay with family and came to visit us in Sydney every two weeks (thanks to the quick and easy direct flights between Hervey Bay and Sydney!). She was our drive back in 2013 & was our force behind us in 2020.”

So, how is team #HerveyBay feeling about their return to our lounge rooms once more?

“One concern is that when we put ourselves our there again in the public eye – “how are we going to please everyone?”

Its certainly not easy, but we love and appreciate the support from everyone in our local community, around Australia and abroad. It’s very overwhelming as we sometimes forget what we have achieved. We are no one special…we are just Dan & Steph from Hervey Bay.”

Don’t forget to cheer on our homegrown legends as they battle it out for another My Kitchen Rules trophy for the mantlepiece in 2020, and keep an eye out for our Ambassadors who will be showing you all the Fraser Coast has to offer over the coming months.

Keep up with Dan & Steph on My Kitchen Rules, on Channel 7.

To see our region check out https://www.visitfrasercoast.com 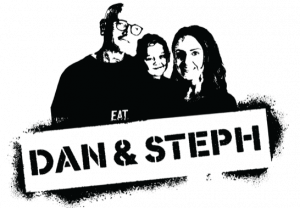